Listen up mom and pop, if you have dreams of raising kids who will take over the family manufacturing business someday, you’re in luck. Comparatively speaking, kids are much more likely to want to follow in your well-laid footsteps than go metaphorically off-roading through the uncharted territory of an unfamiliar career path. 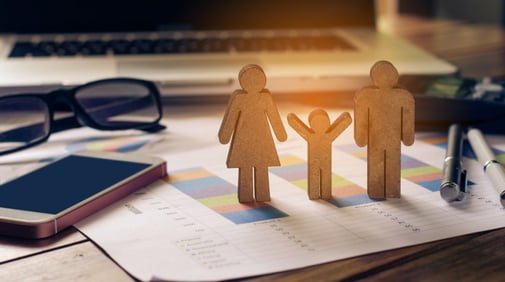 In this week’s MakingChips podcast the guys discussed a January 2019  news story from the Chicago Tribune addressing the succession crisis faced by family-owned, Chicago-based manufacturing businesses. A new report from the Great Cities Institute at the University of Illinois at Chicago shows, of the 363 family-owned manufacturing companies it identified in the Chicago area with between 20 and 250 workers, about three-quarters of respondents had owners over the age of 55, and of those, half had no plans for succession. Probably the most noteworthy statistic from the survey showed 62 percent of respondents had not designated a specific successor, up from 38 percent in a similar survey conducted in 1989.

As a reporter myself, sometimes I can get so caught up in the news and numbers, I forget to run it against my own experiences and what I’ve learned in the nearly fifty or so years I’ve been living and working and raising a family. However, all this talk about succession over the last few weeks has touched on my experience from a personal angle.

My father grew up in Mt. Carmel, PA, a coal-mining town. He was the rare kid who managed to get a college scholarship based on academic merit and win the chance to do something different. The scholarship was to Bloomsburg State College, a teaching college, and he attended and studied to be a high school English teacher.

After a few years of teaching at Willingboro High School, Willingboro, NJ, he and my mother, who was also a high school teacher, had me. Like many people in the teaching profession, my parents had to make some economic-based decisions that led to my mother staying home to care for me (and my twin brothers who followed shortly behind), and my father taking a part-time job, working nights and weekends, so they could move us out of an apartment and into a house.

My dad started working as a used car salesman for a man who not only owned a number of used car lots, but was also a very successful new car dealer. Mr. Brandow had two sons, both just a few years younger than my dad. His sons were in Ivy league schools studying business and finance law. Mr. Brandow planned to have his sons take over his car dealing empire, but over time that plan got complicated.

Less than one year after taking the job at the used car lot, Mr. Brandow sat down with my father and offered him a big promotion and a big raise. It turns out my father loved everything about selling cars, and he was great at it. After some consultation with my mother, my dad left teaching and became a new car salesman and, within a few years, he climbed his way up the ranks to become the new car manager over multiple dealerships owned by Mr. Brandow.

When it came time to retire, Mr. Brandow, who was clearly a savvy businessman, changed his original succession plan and handed off his business to a partnership consisting of his two sons and my father. This story has a few more twists and turns, but I will stop here for now because this introduces my first point:

In this case, Mr. Brandow’s two sons were financial wizards, with great business acumens. They were hypothetically very capable of running a business - any business! - but neither of them had the same kind of passion for cars their father and my father had. Mr. Brandow, when it came time to pass the torch and insure his legacy, believed his successors needed to have it all, and compensated by investing in my dad and raising him up to fill in the gap.

A few years ago, The Harvard Business Review put out an article about “Ending the CEO Succession Crisis”, where writer Ram Charan addresses the incomparable importance of not just having a plan to replace top leadership, but having a good plan.

Charan states the result of poor succession planning is often poor performance, which translates into higher turnover and corporate instability. He points to a Booz Allen Hamilton report showing the global average for CEO tenureship is now just 7.6 years, down from 9.5 years in 1995. (In a related article from HBR, Dan Ciampa reports two out of every five new CEOs fail in the first 18 months.)

The New York Times published an article in 2017 about the history and psychology behind children inheriting jobs from their parents. In addition to covering the statistics of which parent the children are more likely to follow and which jobs children are more likely to inherit, the article looked at some practical psychology behind children choosing or not choosing to follow in the family business.

One big factor in passing down occupations is the connections parents offer within their fields. The article states, “Children who pursue the same job as their parents often start ahead, whether through inheriting a family business, getting an internship at a parent’s company or having a parent put in a good word with a colleague.”

Another influential factor in children pursuing their parents’ jobs is the “breakfast-table effect”. All those family conversations kids overhear and/or take part in have the immeasurable ability to fuel interests and teach children what is less commonly understood about certain careers and business cultures, making entry into these fields feel as though the person has understood the business their whole life and now fluently “speaks the language”.

Finally, certain aptitudes are simply inherited -- such as making things by hand, achieving academically, or producing original art and music -- as well as economic standards of living.

My father-in-law, Monty Schmitz, worked at Boeing Wichita for as long as I knew him. As a matter of fact, in 1969 when engineering responsibility for the Boeing KC-135 aerial refueling aircraft, which was built in Seattle, was transferred to Wichita, the company began hiring laborers at the entry level. This is what prompted my mother- and father-in-law to relocate from the panhandle of Texas when my husband was five so my father-in-law could leave behind his inherited career in farming and try manufacturing instead. Monty worked at Boeing, slowly rising up the ranks from the shop floor to a desk job until he retired at age seventy.

I met my husband in college when we were both nineteen and he was the starting free safety for the Temple University football team. He was also majoring in mechanical engineering. Truth be told, no matter what it looks like now, my husband went to college solely to play football. While he was actually a straight-A student, he really didn’t seem to have a burning desire for engineering, or any other profession for that matter.

If you really want to have some fun, take a look at this highlight video I made from his senior football season. If you’ve got the time, go ahead and watch the whole thing and try to appreciate both my novice editing skills and my early 1990’s musical choices. However, if you don’t have time, the point I want to make is related to what happens around the 8:12 mark when the future Dr. Tony Schmitz, professor of mechanical engineering and respected manufacturing researcher, talks about why he chose Temple University and what he wants to do with his life. Here’s a clue: he mentions the words, “my dad” and “Boeing”.

A recent article from The Spectator says this:

“Farmer’s sons have historically become farmers. If you are immersed in the world of farming from the very beginning of your life, farming will be close to your heart, intrinsic to your identity. The same goes for children of actors, who will hear their parents talking about acting from infancy, meet other actors who have come round to visit, talk about acting to actors. A child of a journalist, who grows up with Radio 4 constantly and unrelentingly blaring in the background, in a home where the shelves heave with books on history, biography and literature, will one day pick up a copy of the many newspapers found lying on the kitchen table.”

While the past few weeks have been devoted to analyzing critical issues and concerns related to family business succession and business practices and principles to facilitate success, I’d like to use my last few paragraphs to throw out some optimism.

Baron agrees these statistics are disheartening, but counters with this:

“But let’s put them in perspective. How many companies of any kind are still around after the equivalent of three or four generations? A study of 25,000 publicly traded companies from 1950 to 2009 found that, on average, they lasted around 15 years, or not even through one generation. In this context, family businesses look pretty enduring.”

Baron continues his article by highlighting five key areas where he says family businesses have the opportunity to achieve sustainable advantages, giving them the potential to be more adaptive to the increasingly intense competition all businesses are facing, everywhere, particularly publicly owned companies.

These key areas are:

I highly recommend reading Baron’s article, specifically to see what he has to say about each of these areas. But even if you don’t read it, I will end my thoughts on succession the same way Baron ends his article - with this:

“The public corporation has been the dominant model for business enterprise for most of the last century, and this reflected the fact it was the best solution to a particular set of economic circumstances. But those circumstances are changing and family businesses that manage the five sources of advantage described above are well placed to make the 21st century a family business century.”

Good news for all of us.