How ProShop ERP Simplifies the AS9100 Implementation Process 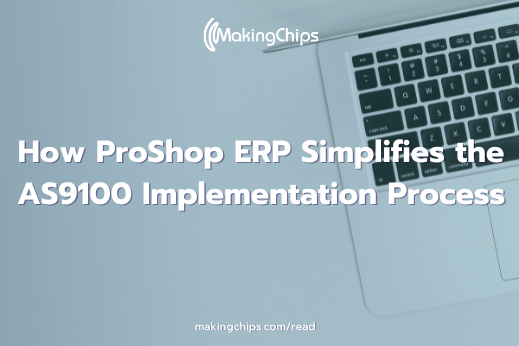 AS9100 is a widely adopted and standardized quality management system for the aerospace industry. It was released in October 1999, by the Society of Automotive Engineers and the European Association of Aerospace Industries.

It’s a high-end credentialing that manufacturers get when they want to exclusively serve the aerospace industry. We couldn’t even get quotes from some customers without having the AS9100 credential.

Carr Machine & Tool has been ISO certified for years and recently transitioned to AS9100. Neither were easy to obtain. It was a time-consuming process that took commitment and cost money. Achieving this certification requires work. Implementing it into your quality management system is time-consuming at best. That’s where John Jones comes in.

John has 36 years of experience under his belt helping companies achieve ISO 9001 and AS9100 certifications. He’s developed customer databases from scratch to run a company's QMS. But when he started at Clinkenbeard, John dove into ProShop ERP and it was a game-changer.

Implementing AS9100 into ProShop

Clinkenbeard was AS9100 approved before John came on board. He’s no stranger to AS9100 credentialing and has completed the process with other companies in under 6 months. He took Clinkenbeard’s system—an antiquated binder system—learned ProShop ERP, took their QMS, and tweaked that data in ProShop until it was AS9100 compliant.

Part of AS9100 compliance is being able to show in whatever QMS program you’re using that you’re checking all of the boxes and meeting the requirements for the AS9100 certification. You drag and drop things in place into templated modules so it’s all contained within the system. But with any template, there are still customizations that must be made for every company to be compliant.

ProShop ERP simplifies the process with the Flying Start Package

John has built many QMSs from scratch. But a template, like ProShop’s Flying Start Package, can accelerate the process. Every piece of information—work instruction, training, material certifications—is imported into ProShop. It’s a huge data depository.

The Flying Start Package is a content package that comes with a full set of QMS documents that are compliant with the AS9100 standard. It fills in models that would normally be empty. They take the content and tweak about 20% to make it their own—versus rewriting their own system or starting from scratch.

Processes, procedures, and tasks are templated in ProShop and linked back to the standard. ProShop creates the links and shares what satisfies each particular statement within a standard. Instead of having to manually show the connections, the system links them for you. ProShop also helps you take each step in order, creating clean trails for auditors, and preventing incomplete data from entering the system.

What happens with an AS9100 Audit using ProShop?

The auditor who had audited with Clinkenbeard for three years was used to the old procedures. So he had to do a systems audit to learn the new procedures. It went extremely well. ProShop maintains almost all of the data of a company. So 98% of the audit was all clicking through procedures, records, training requirements, calibrations, etc. in ProShop.

John only had to go to HR one time to get a training record, simply because it hadn’t been imported into ProShop yet. The audit on the floor was the 2% of the time not spent in ProShop.

John finds auditing to be an easy process. He’s done it for years and could do it in his sleep. It all comes down to being prepared. He uses checklists and he notes that once he gets through it and he can say “Yes, everything is in there” he sleeps very well.

When Paul Van Metre—the founder of PRoShop ERP—had his own CNC shop in Seattle. The auditor came in and the power in the entire area went out. So they unplugged the server, drove to a hotel room, and completed the audit in the hotel. They got a perfect score. As long as you have internet access and a computer, an entire audit can be done remotely using ProShop.

How else can ProShop help speed the process? How has the ERP system impressed customers when they conduct audits? We cover all the details in episode #316 of the MakingChips podcast!