Manufacturing and Unemployment: Something Doesn’t Add Up

Math has never been my strong suit, but lately, even I am starting to think something isn’t adding up when it comes to manufacturing employment data.

This week’s MakingChips manufacturing news segment focused on a report from Oxford Economics addressing “what automation really means for jobs and productivity”. Jason and Jim discussed a couple of interesting data points, most notably that every newly installed robot replaces 1.6 manufacturers.

The skills gap, unfilled jobs, and jobs being lost to automation and robots are topics we’ve been covering for months and I feel like I should be an expert by now, but recently I was embarrassed by a simple question for which I had no simple answer.

There’s this really great automotive noise and heat insulation company I’ve done some writing for, Second Skin Audio. Recently I was chatting with the owner, Sturgeon Christie, about the irony of having 500,000+ unfilled manufacturing jobs coupled with a generation of millennials struggling to find work. He sent me a follow-up question that really set me back.

What a simple question, right? Well, take a few minutes in your role as a manufacturing leader and think of how you might answer Sturgeon’s question.

To my knowledge, there is no simple answer.

I read an article in the New York Times education section a few years back, “Wanted: Factory Workers, Degree Required”. The opening paragraphs referenced the hiring statistics at a new gas turbine production plant the German engineering company, Siemens Energy, opened in Charlotte, NC. Ten thousand people showed up at a job fair to fill 800 new positions, however less than 15 percent of the applicants were able to pass a reading, writing, and math screening test geared toward a ninth-grade education.

This is the quote I remembered from the article:

“In our factories, there’s a computer about every 20 or 30 feet,” said Eric Spiegel, who recently retired as president and chief executive of Siemens U.S.A. “People on the plant floor need to be much more skilled than they were in the past. There are no jobs for high school graduates at Siemens today.”

While the majority of manufacturing news articles we have covered over the past year focus on how many jobs are being lost to automation, how many open positions are unable to be filled due to lack of skill or interest, or how politics and/or economics influences these issues, rarely do we come across news focusing on the path to obtain the bulk of today’s vacant manufacturing positions.

Most unfilled manufacturing jobs fall into an employment category known as “middle skills” jobs -- jobs that require education beyond high school but not a four-year degree. According to the National Skills Coalition, middle-skills jobs make up the largest part of the labor market in the United States and in each of the 50 states. 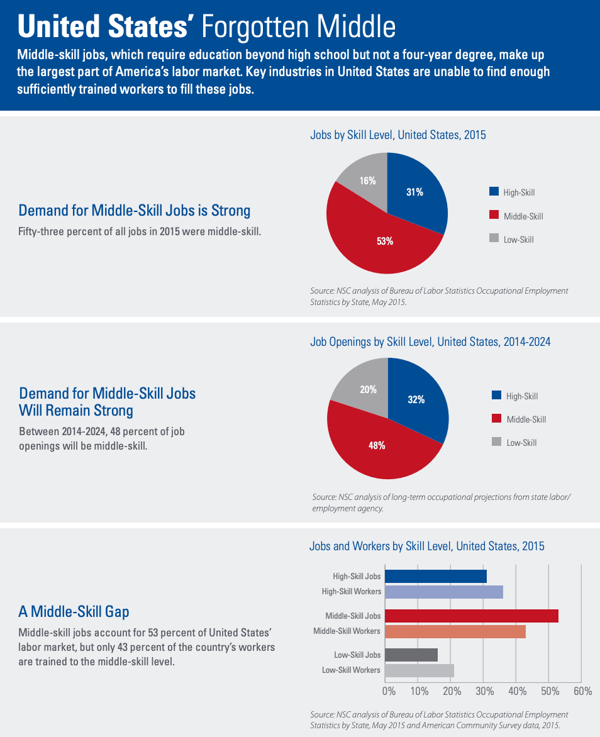 There is a growing number of college-educated young people with the desire to work and contribute to society, but they are not being directed toward middle-skills jobs. Why?

While I would actually have to take a few years off to write a book about the psychology and systems contributing to this problem if I truly wanted to try to understand and explain it, I do have a general idea based on my research over the past year.

The National Association of Manufacturers and the Manufacturing Institute reports that despite sixty four percent of Americans believing US manufacturing is high-tech and globally competitive, less than half believe manufacturing jobs are interesting and rewarding, clean and safe, and stable and secure than in the past.

Further, less than three in 10 Americans surveyed said they would encourage their children to pursue a manufacturing career.

As I researched news articles for this story I ran across a quote that really struck home:

"We know it is no uncommon feeling among all classes of rich and poor, to make wide distinctions, one looking down or up to another because of its particular profession or trade. Great excellence in mechanism, the skill of hand, and mental ability will always command admiration, but the feeling we would desire to see generally cultivated is respect for all wise and honest men irrespective of their kind of labor."

Upon a closer look, I discovered this article was published by Scientific American in 1853 - one hundred and sixty-six years ago. This passage of time may account for the less-than-politically-correct use of “men”, rather than “men and women”. But equality issues aside, I found resounding value in the author’s wish that personal dignity be something equitable to a person’s character, not their job title.

The two major assertions arising week after week in employment-related manufacturing news include an image problem and a communication problem.

Certainly, data shows a lack of understanding regarding the value and dignity of a career in manufacturing. Yet importantly there is also a lack of a clearly defined path into our industry for any person seeking to enter it, and this I believe is an even bigger issue.

Circling back to Sturgeon’s question of how a young college graduate might pursue one of these 2 million unfilled manufacturing jobs, the trouble is I still don’t have an answer.

If you have any ideas please send them my way christine@makingchips.com. I’d love to hear from some of our MakingChips followers on this issue.

Overcoming an image problem is complicated. Clearly, this was an issue within our field we can trace as far back as the 1800s. Did you encounter any social obstacles or peer pressure when you chose manufacturing?

Of the people I personally know within the metalworking nation, all have had rewarding careers within safe, stable, and secure environments. Would you say the same?

Finally, I will ask you the same question I started with: If you were recommending to a new college hire where to go look or what credentials to try to have for these 2 million unfilled jobs, where would you tell them to start?

Metalworking nation, I await your reply!