Metrics that Matter: Striking a Balance between Your Team and the Data 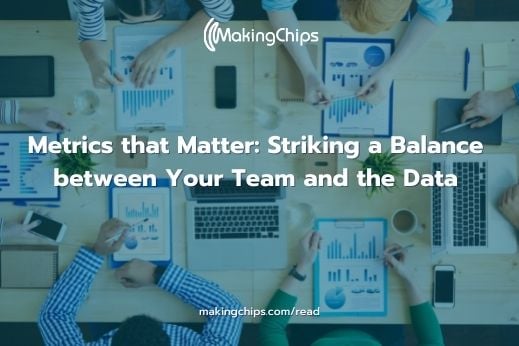 Jim 100% cares about his employees and treats them well, probably more than many other employers. But at the end of the day, he’s the leader who has to create an environment that’s running efficiently.

Some people treat their team as human resources or simply numbers that drive results. Nick really likes the people he works with and is even part of a fantasy football league with them. There’s a line that you can’t cross somewhere—but where is it? How do you strike a balance between building a profitable business based on metrics while taking care of your employees?

Find a balance between the metrics and the human

Amazon has recently been called out for firing delivery drivers who don’t fit their metrics for a productive worker. But the employees claim they’re being judged on metrics outside of their control and being unjustly fired (even worse, they’re being fired by email).

Jim understands Amazon’s objective—to make money. They’re progressive and are trying to be better than the competition. They do a really good job at what they do and everyone has become dependent on them. They've even become a competitor to us as a tooling distributor. We get that you have to demonstrate continuous improvement and you need data to do that. But there must be a balance. Firing someone for metrics they can’t control doesn’t seem right.

Are metrics always the #1 priority?

I know several individuals where the primary emphasis in their sales job is being asked to record sales data that doesn’t contribute to what they do (i.e. profitable sales growth). For example, they had to record every detail of every phone call they made. One of the individuals is grinning and bearing it. The other left the company because he had enough.

Part of the conversation could have been about the customer’s family. An algorithm may say that’s not efficient—but people buy from people they know and like. You have to get to know your customers. I’ve had these discussions with my salespeople and customer service team who are at odds about this. I don’t mind if they’re having those invaluable conversations. Why?

Because they’re building relationships. I don’t ask my salespeople to track that data, just like I’m not asking my accounting team to track how many collections calls they’re making. I’m not asking my purchaser to tell me how many quotes they completed today. But many companies are so data-driven that they want all of these details. But what are they doing with it?

Focus on the metrics that matter

If someone is hitting sales targets, we focus on continuing the forward progress. If someone isn’t reaching their results, we talk about why they aren’t achieving objectives. What activities are they engaging—or not engaging—in? Is every deal tied to an order booked? There is results-based compensation, activity details, etc. and those things are important to a sales manager.

I don’t usually talk about activities with my best guys. But what if your sales team is struggling? Nick will ask to see their calendars, calls, activity logs, etc. You can also look at that data with your best sales guys to see what they’re doing right. That can be useful to help those that are struggling adjust their activities. The focus is on activity-based metrics that matter, metrics that can drive growth and profitability. You need to focus on recording only necessary data.

The bottom line is that everyone needs to take a step back and think about this. Is your compensation program fair? Are the right activities being tracked? Are the metrics you’re focused on helpful to your team members and your company?

We cover this topic in-depth in episode #283 of Making Chips. Go check it out to learn more!