Titan Gilroy: Willing To Do What It Takes 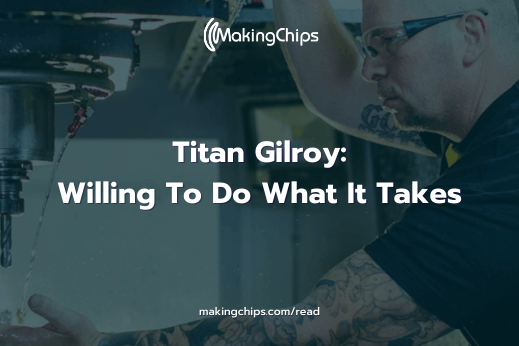 One of the great things about manufacturing is that you don’t need to have a college education or degree to be a success. The opportunity is available to anyone who recognizes the opportunity and is willing to do what is required to take advantage of it. Titan Gilroy is a prime example of the kind of success we’re talking about. He grew up very poor in Hawaii. His mother didn’t even own a car, so they hitchhiked everywhere. It wasn’t the most promising start in life.

But as Titan says, “No matter how bad life gets, life is levels. You can cut that chain and now you’re qualified to help other people who went through what you went through.” He had an opportunity to move to Oakland, CA to pursue boxing. That led him to professional fighting in Las Vegas. One night, when he returned to Hawaii to visit, he found himself in the wrong place at the wrong time and got involved in a fight where the “other guy” was seriously hurt. As a result, he wound up in prison.

After serving three years, he got out and vowed he was never going to hit anyone again. He went to Home Depot to apply for a job and was turned down. But that rejection led him to dig a little deeper and he found an advertisement in the classifieds section of the newspaper that read “Saw Operator Wanted.“ He applied and got his first manufacturing job at Campbell Tool and Metal.

At CT&M, Titan excelled, even though he’d never heard the words “CNC Machining” due to growing up in Hawaii, where there is no manufacturing industry. Within months he was able to operate every saw in the shop. As an aside, he notes that Hawaii’s prison system has one of the highest recidivism rates in the country for inmates who are released from prison. He believes that like him, these former prisoners wouldn’t feel the desperation that nudges them back toward incarceration if they had the opportunities manufacturing brings.

One day a driver, who he’d known for some time came into the saw shop and told him to go apply for a role at a Machine Shop in Sunnyvale, CA. Zinola Manufacturing was looking for a young, talented guy to learn the trade. Titan applied and told them he’d be their best worker within a year if they hired him. His persistence and confidence in his ability to learn paid off. He was hired by the owner and within a year, he grasped how to fine-tune the machines. He proved to the owner that he could make the manufacturing process more efficient and was given more and more latitude because Titan was saving him money, which meant he was making the company money. He went over and above to make sure the company was solvent and making its deadlines and his compensation followed suit.

After working at Zinola for many years, Titan had the opportunity to become a freelancer, working for large companies as a programmer to help them fine-tune their operations and solve problems they were experiencing on the factory floor. That success led to more opportunities until finally, using a loan offered by a friend he’d worked with, he opened his own machine shop — Titan Engineering. Because this friend Jeff believed in him so much, Titan worked even harder. He turned the total loan of $125,000 into a $625,000 return for his friend. Beyond that, because of his deep appreciation for his friend’s trust, he set him up with $2,000 a month for the rest of his life.

The beginning of his new company happened through others believing in him, from co-signing loans for him to giving him extended lines of credit to take advantage of opportunities and large jobs that came his way. The company became a job shop and specialized in doing complicated, specialized jobs with excellence and dependability, for a lower price. His reputation grew and he began to specialize in what he calls the “art of manufacturing.” Holding his team accountable for the highest specs and quality moved his company to the next level and opportunities to manufacture for the biggest and most significant projects came his way as a result. Over three years he went from six employees to over 50 employees and over $1M a month in revenue.

Titan’s story is not being told here to impress you or to make him into an unreachable role model. We are telling his story to encourage you with what is possible through the avenue of manufacturing. If you are willing to emulate what Titan did, you too can learn, grow, and take your destiny into your own hands.

What are YOU willing to do to be successful in manufacturing?

You can hear part one of Titan’s story on episode 286 of Making Chips.