What Networking Is—and What it Most Definitely Shouldn’t Be 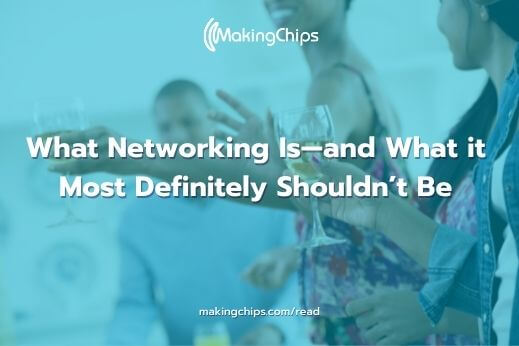 A sales leader on Jason’s team thought it would be a great idea to focus on networking as a way to find sales opportunities. So Jason let him join different associations and attend events to try and drum up business. But it wasn’t producing the results that they expected, so they cut back on the networking. The question is—should increasing sales be the true objective of networking?

Jim believes if you go into networking thinking you’re going to win sales, that it’s the wrong attitude to have. Jim points out that “If you meet people and become friends with people and build relationships the sales process will happen organically.” So what do you do? Make it about people—not what they can do for you.

It’s about striking a balance

Many organizations join associations purely for sales which is the wrong mindset to embrace. But you also don’t want to go to industry events and never talk about your business. But the goal should be to have conversations and learn from other people.

If you walked up to someone and immediately tried to sell to them, what happens? They immediately get turned off. What’s a better tactic? Ask someone how their business is going. People love to talk about themselves. You can ask follow-up questions to learn more about their business. It builds rapport and the foundation for a relationship. Encourage people to talk about themselves and things will happen organically.

Michael Gaunce—with Schunk—and I are both leaders in the same industry. We never really talked work, but in a conversation, we found out that we were each going to Germany the same week. We also both enjoy skiing and snowboarding. So we stayed an extra day in Europe and went to a hill together. We talked for three hours on our drive. Now they’re one of our best partners.

Jason had a similar experience in Korea when visiting YG-1 plants. He was moving from factory to factory and ended up eating Korean BBQ with the people he was working with. He developed great relationships with the people there by bonding over a meal. You never forget the relationships that unfold through networking that isn’t forced. The truth is, sometimes business goes better the less you make it about business.

Embrace the concept of ad-hoc networking

Sometimes you need your ears to the ground to know who to talk to, right? Then you need to have the confidence to introduce yourself. I was in Europe and doing work there for Hennig. I ran into 5th Axis. So I went over to introduce myself and met the Co-CEO, Chris Taylor. In our conversation, he found out that I worked with the largest domestic producer of tombstones. Turns out they were looking for someone to partner with. That’s how our relationship with 5th Axis started. It wasn’t planned—it was spontaneous. It took some guts to walk up and say hello and it made all the difference.

Does networking really change your business?

The short answer? Yes. There is always a positive from any networking that you do. But you need the right objectives going into it. Networking is like a 401k. The more you put in, the bigger your network gets. The most valuable tool you have at your fingertips is your network. To hear more of our thoughts on the topic—and more stories about how it transformed our businesses—listen to episode #281 of Making Chips.