Where Can Manufacturers Find Value In The Stock Market? 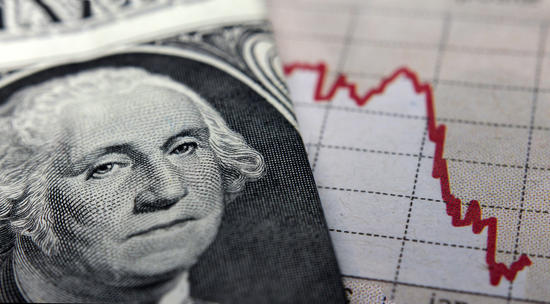 In this week’s MakingChips podcast, the guys were discussing an article by Barron’s encouraging us all to stop worrying about recession since the stock market is hitting new highs. The conversation was going back and forth, considering new facts and opinions, when Jason off-handedly asked, “Is it the Dow everybody always talks about?”, meaning, “Is it the Dow that tells us if we are in recession?”

It was just a simple question. So naturally I wondered if there was a simple answer to match.

I will readily admit I know very little about the financial markets or how they work. When it comes to personal savings, investments, and retirement, my husband and I were lucky enough to receive some valuable advice from my dad back when we were in our early 20’s, and we were just barely smart enough to follow it.

Having run his own small business for 30 years and raised a family, he told us to hire a financial advisor and build a life-long relationship. We did this and, while I am sure we’d fall into the ‘conservative’ category by anyone’s standards, we’ve been able to budget and plan for houses, cars, braces, travel sports, college educations, vacations, and retirement, while still living comfortably within our means. Thanks dad! 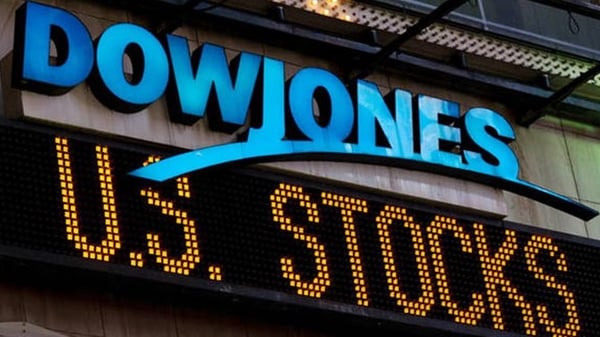 First, it is important to know the Dow Jones Industrial Average (Dow) is a stock market index.

In the US, the Standard & Poor 500 (S&P 500), the Dow, and the Nasdaq Composite are the three most broadly followed indexes by both the media and investors. In addition to these three indexes there are approximately 5,000 others that make up the US equity market.

Much to my surprise, the Dow is made up of just 30 stocks, but these companies cover all major sectors of the US stock market, except for transportation and utilities. All of the companies in the Dow are considered major players in their respective industries and most are household names: Boeing, Coca-Cola, General Electric, Microsoft, Visa, etc.

The Dow, however, is a "price-weighted" index, meaning companies with higher stock prices have greater weight in the index's calculation. But Dow isn't just the sum of the stock prices of the 30 stocks, it's a scaled average, meaning the index's value is adjusted to account for certain noteworthy changes to the individual stocks over time.

So, what does the Dow have to do with identifying recession? The simple answer is: nothing and everything. Frankly it depends on who you ask and, more importantly, who you listen to.

Historically, recession is identified when the National Bureau of Economic Research (NBER) announces it, and/or the GDP declines for two consecutive quarters. However, these identifiers don’t really help anyone because they are too slow to be useful for policy.

You may recall the NBER announced the Great Recession in December 2008, a full year after the recession had already started, and far too late to initiate any helpful policy.

It surprised me to discover many economists believe the unemployment rate, specifically rapid increases, is the best real-time data measurement to accurately identify recession.

Economist Claudia Sahm writes in a new book, if the unemployment rate (in the form of its three-month average) is at least 0.50 percentage points above its minimum from the previous 12 months, then the economy is already in a recession. As this figure from Sahm’s book shows, this indicator has both correctly signaled a recession 4–5 months following the beginning of the recession, and has virtually never called a recession incorrectly since 1970. 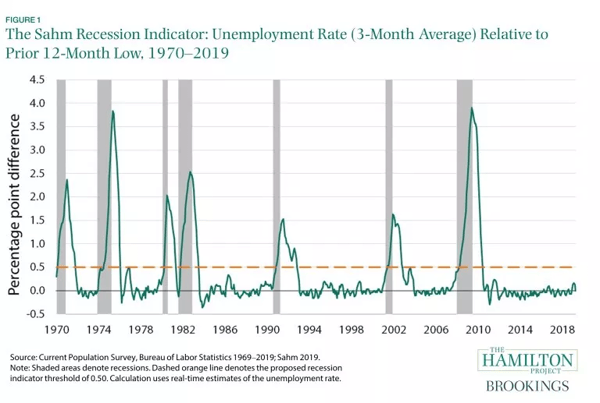 According to Bloomberg, there is no single indicator that can predict or determine a recession, though there are a few major data points that come close. While Bloomberg doesn’t mention the Dow, or any other stock market index for that matter, here’s what they say is important:

Of these, it was “Manufacturing Surveys” that caught my eye. I learned the Institute for Supply Management (ISM) and five Federal Reserve banks conduct monthly surveys of manufacturers and other companies. I lost a full day reading through the May 2019 report. Basically, it is an ever-changing, month-to-month gage of personal temperaments among manufacturing business owners and others.

Here are a few of the comments from the May report:

“The threat of additional tariffs has forced a change in our supply chain strategy; we are shifting business from China to Mexico, which will not increase the number of U.S. jobs.” (Chemical Products)

“Sales continue to decline. Volumes are off, profits haven't decreased in proportion to sales. Higher-margin vehicles continue strong sales, but low- to mid-range sales are down.” (Transportation Equipment)

"Sales remain strong. Labor remains tight. Tariffs are having a significant impact on cost of goods. No impact on where we buy our goods." (Food, Beverage & Tobacco Products)

“Business is continuing to grow and expand. The pressure for driving out costs has increased significantly, and my company is facing major changes over the next several years to remain cost competitive.” (Miscellaneous Manufacturing)

“Weather in the middle of the country has slowed construction and infrastructure projects.” (Nonmetallic Mineral Products)

“Business continues to be very strong. Our company and our supply base continue to be challenged getting manpower for production. Key commodity costs like steel have continued to come down. Lead times with suppliers have stabilized after moving out two to three times what they were a year ago. Supply base performance has improved over the last 90 days and stabilized.” (Machinery)

“Newly increased tariffs on Chinese imports pose an issue on a number of chemicals and materials that are solely produced in China. We are expecting increases in raw materials starting June 1.”  (Plastics & Rubber Products)

What I can tell you after five solid days of sliding down various rabbit holes of research is there is no single indicator of recession. I’ll add that the Dow is certainly not the main indicator, though I agree with Jason, it sure seems to get a lot of attention when it comes to the financial news media.

As a manufacturing business owner, it is important to know that even the top financial institutions in the world believe you are personally among one of the most important sources of information when it comes to weighing current markets and predicting the future.

So what do you think?

When you read through the comments from the May 2019 ISM report, do you share the sentiments from any of the comments? As far as the unemployment rate goes, where do you stand on hiring, firing, and other employment and compensation issues?

In this week’s podcast, the guys closed out their discussion of financial news with this warning: Don’t listen to us!  Everyone unanimously agreed MakingChips is not the place to learn what to buy or sell, and when to take risks and make assessments. If you want advice on these things I’d refer you back to my dad’s advice, circa 1994: hire a great financial advisor.

However, if you want to know if a recession is coming, you may not need to look much farther than your own backyard.

There are plenty of sources for information - stock market indexes, government reports, and financial media reports to name a few -- but ultimately we, in the metalworking nation, may know more than we think.

Subscribe to MakingChips and get notified on whats new!